I recently visited Lissenung Island Resort and had a look at their privately organized conservation effort to help the critically endangered Hawksbill Sea Turtle with their breeding. The Turtle and it’s eggs are regularly on the menu of the local population. I don’t find it morally wrong to eat turtles or the eggs, at least it’s not worse than eating any other animal, like a cow or a pig. However, the growing human population has a higher demand on the turtles than they can cope with. Therefore they are in urgent need of protection, otherwise they go extinct. It is forbidden to hunt them but poachers usually don’t care about bureaucratic details like that. Also, the turtle eggs have been eaten for generations, so why stop now? 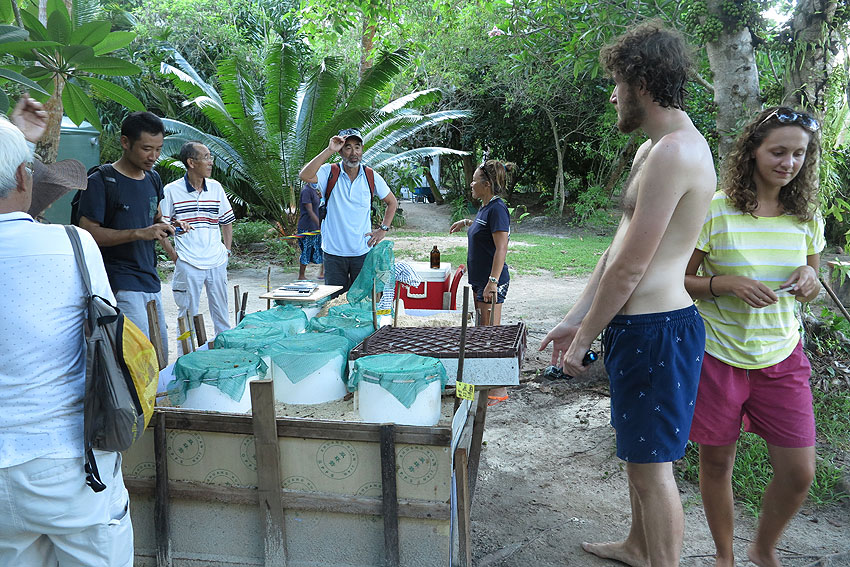 Lissenung’s owners Dietmar and Ange drive daily to the known breeding sites by boat to rescue the eggs before the poachers get there and put them in artificially built nests on Lissenung. They are so busy doing it, most nests seem to be permanently occupied. I wanted to see a nest hatch and they put me on an email list to be notified when one is due to hatch. The nest was actually due on Dec 12th but the little turtles were a bit inpatient and hatched 3 days early. Unfortunately most people who were initially interested couldn’t come along because of work commitments. My own, currently slow job made it possible to sneak out in the afternoon and head for Lissenung. There were still a few people who could make it. With me were the college’s air condition system instructor from Japan with his wife and a few colleagues and Pat, the american anthropologist who usually lives further down on the west coast in remote villages to conduct his work. On Lissenung we met a few tourists living there and Catherine and Marcus, the two medical students who are in Kavieng for three weeks to work in the hospital and who had great real life stories of all the colorful injuries one can get with a machete.

The turtles had already hatched during the early afternoon. Ange put a coconut shell on top of the nest because it has to be nighttime for the hatchlings to be released into the sea. The chances of survival are slim enough as it is, less than 1 out of 1000 hatchlings makes it into adulthood. It’s therefore slightly better to walk to the ocean at night when the sea birds can’t see a thing and the baby turtles are at least somewhat safe on the landside. There is enough danger in the water waiting for them. The Lissenung team has a bit of work to do before they can be released. Every egg is counted and the turtles are being measured and weighed. Our nest had 185 eggs. 176 hatched. This is a very high number, Ange told us that other conservation sites report success rates of around 70% -80% percent, the Lissenung nests mainly have a success rate of around 90%. It seems to be working well. The whole work had an extra challenge added to it thanks to the flying foxes in the tree above us. They seem to wake up at that time of the day and became very active, one always had to watch the branches above, otherwise you would have been shit on, nuts and branches fell on our heads and occasionally liquid sprayed down.

After darkness had set in they brought the bin with the hatchlings to the beach. Ange was in the water with a spot light. The little turtles usually follow the moonlight and this was trying to guide the way. Ange told us that turtles which hatch during the daylight hours often get a bit confused and can’t find their way to the water. Half of the turtles went straight for the sea but the other half walked around a bit aimlessly. We tried to help them the by turning them in the right direction, somebody even drew arrows for direction into the sand. Even the dumbest turtle should be able to find the right way with all this help. However, they didn’t. When the turtles already in the water started to come back, Ange decided to put them into the water by hand.

It was quite hard not to step on one in the darkness, they are only a few centimeters long but we managed. I felt a light thud on my ankle when a small wave washed one of the turtles against my leg and it did not know how to walk around the obstacle so I picked it up and carefully put it in the water. I don’t think there are many chances in life to hold a real living baby hawksbill turtle in your hand, it’s pretty cool. My good deed of the day. I assume it was eaten about 10 minutes later by a shark already waiting for dinner to be served. But it’s the thought that counts.

I asked Ange how the locals perceive their efforts and if they feel like they are getting in competition with the poachers. Fortunately, she said, this doesn’t seem to be a problem. The attitude seems to be more like: “oh well, let’s eat something else then.” Ange said she is bringing in kids form the local schools to teach them about the turtle and they apparently love them and seem to be quite understanding about the situation. So it’s just another lack of education again. Tell the people, they will understand and most will be supportive in their protection. It’s good that there is no commercial turtle poaching going on, people tend to be more resisting on loosing a few dollars than loosing one item on the menu.