It is hard to believe but I have heard rumours, my camera equipment is on its way, the container ship left the city of Lae yesterday. It should arrive later this week. I was about to give up hope. Now I am facing the task of having to get back into a “work mode”. Over the past 2,5 months my brain has somewhat gone into a hibernation mode. After all, all I did was wait, wait, wait. I have done lots of reading, drawing, blogging and all sorts of other things and I certainly have found out I can busy myself without an outside input but now I have to slowly get back into the habit of dealing with people, talking and being organized for an outside organisation.

I have finally found the person who is responsible for the courses at the College, thanks to my co-volunteer Rob. Despite my own queries over and over again, somehow I did not get access to this information. I did know the guy but as the “Head of Maintanence”. To me this means he is delegating work when things break down. I did not know this also means “running the courses”. In any case, I am making slowly progress, possibly. I now have a rough idea which courses run, why and how they are organized. That is a big improvement. Unfortunately I still don’t see any progress in terms of getting a “local counterpart”. This is bad news. I noticed there is never any kind of hand over from one job to the next. I actually notice this is trend everywhere. I guess it saves a few dollars by avoiding any overlap of two people in the same position. Unfortunately I do not consider this to be a good approach in terms of keeping the workflow smooth and the quality of the job high. But cheap = good, usually. It’s not, I can prove it, but in the heads of CEO’s it is. Well, probably don’t think that either. I guess they just don’t care because, after all: cheap = good and that’s all that counts these days. Maybe this attitude is part of the reason the 62 richest people in the world now own roughly the same as half the human population (the poor half), according to the numbers I’ve read in the german newspaper “Spiegel-Online” today. Maybe I am a bit too sensitive but it doesnt sound quite fair to me.

In any case, I hope I can get through with my suggestions of training somebody up as my year here would be pretty useless 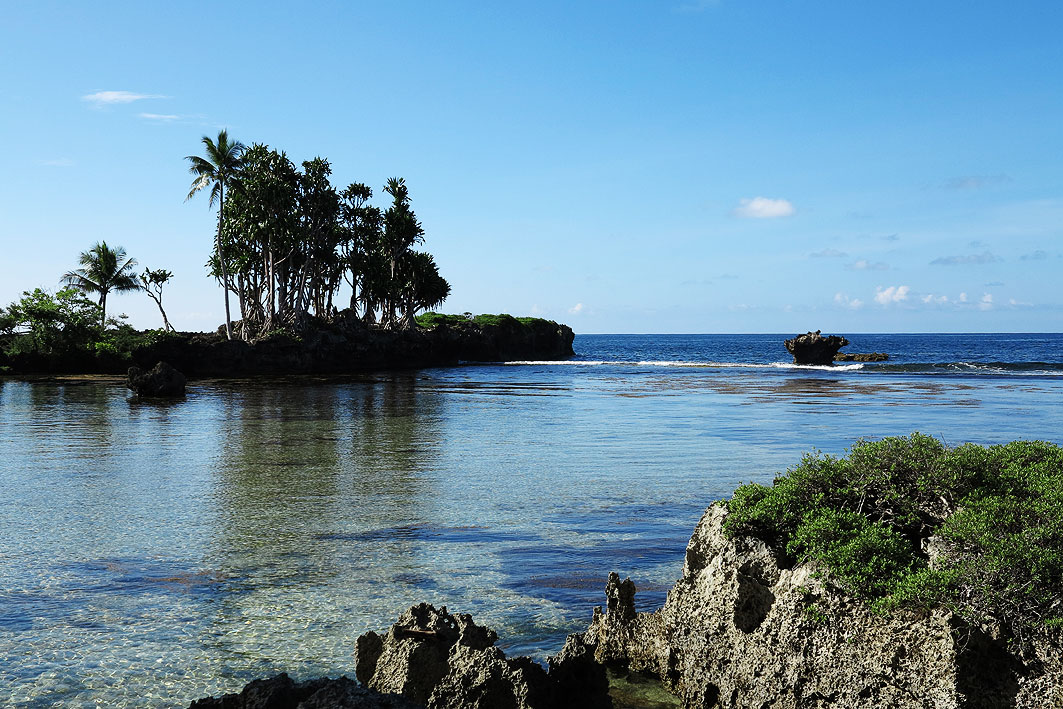 otherwise. Lots of projects would be started, nothing finished. And with nobody trained up they would continue to be unfinished. It is a problem for me that this is a Fisheries College. Film and video production work really needs a very different way of thinking than operating a fishing vessel, not better or worse, just different. Main difference is that it takes a lot of planning ahead. One can not just “wing it”. Well,one can, but the result will be a bad quality film. And they have had that experiences in the past in the past. So I am trying to establish the fact that if one continues to use the same attitude which delivered bad results, the results will continue to be bad. It’s a bit like Albert Einstein said: “”Insanity: doing the same thing over and over again and expecting different results.”

Privately I was a bit lazy in the past few weeks. It is not easy to just do something here on the weekend. Everything needs planning and usually requires the booking of a boat. I am used to go into the bush on the weekends but it is so hard to get away in Kavieng. People seem to live absolutely everywhere. I am racing around on my bike, exploring the area but no matter where I go, no matter how small the bush track is, I always end up going through somebody’s backyard, scaring chickens away and trying to avoid the lines of laundry so I won’t end up with a bed linen wrapped around my head driving into a ditch. Also, just about everybody wants to buy my bicycle. I bike tour to me feels like running an auction. I should open a folding bike business here, I could get rich. So just to keep things simple I stayed at home a lot.

I did go out to buy food. The market has some unexpected entertainment from time to time. Last Saturday it was a chinese shop owner who came along in his jeep and for some, not really apparent reason, lost control of his vehicle and smashed into a tree in a very dramatic fashion. It sounded like an airplane crash. He didn’t get hurt because he was only driving at walking speed but it was still a great spectacle. The whole market applauded and I heard several people say: “It’s ok, he is chinese and has enough money to fix it.”

One Sunday I went with Peter, Norah and Adrienne to Big Nusa Island to do a walk. Big Nusa has a trail which goes around the island and one can visit some of the remnants of bunkers and weapons the japanese left behind after 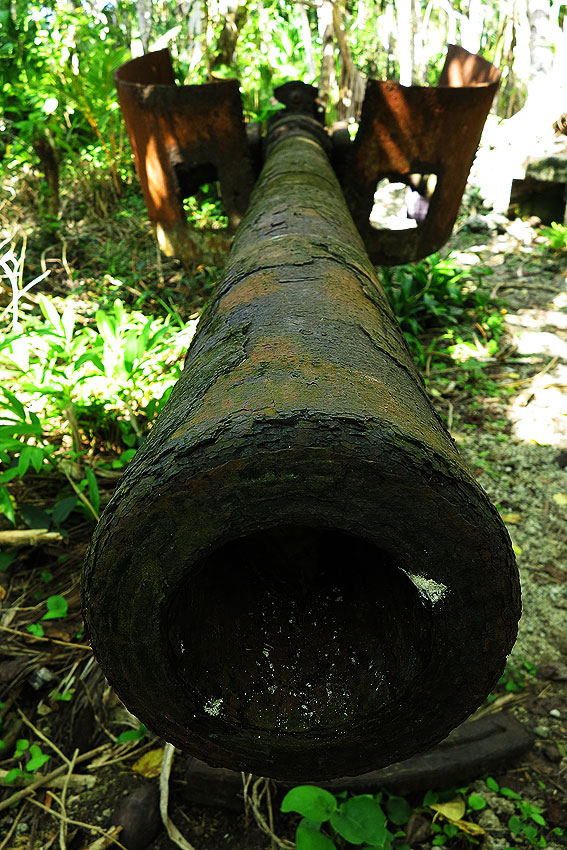 World War II. Kavieng had a horrific period during World War II after being invaded by Japan. All over town one can still see the remnants of bunkers and large guns. Several fighter planes and shipwrecks are scattered all over the harbour area and are a now popular dive sites. 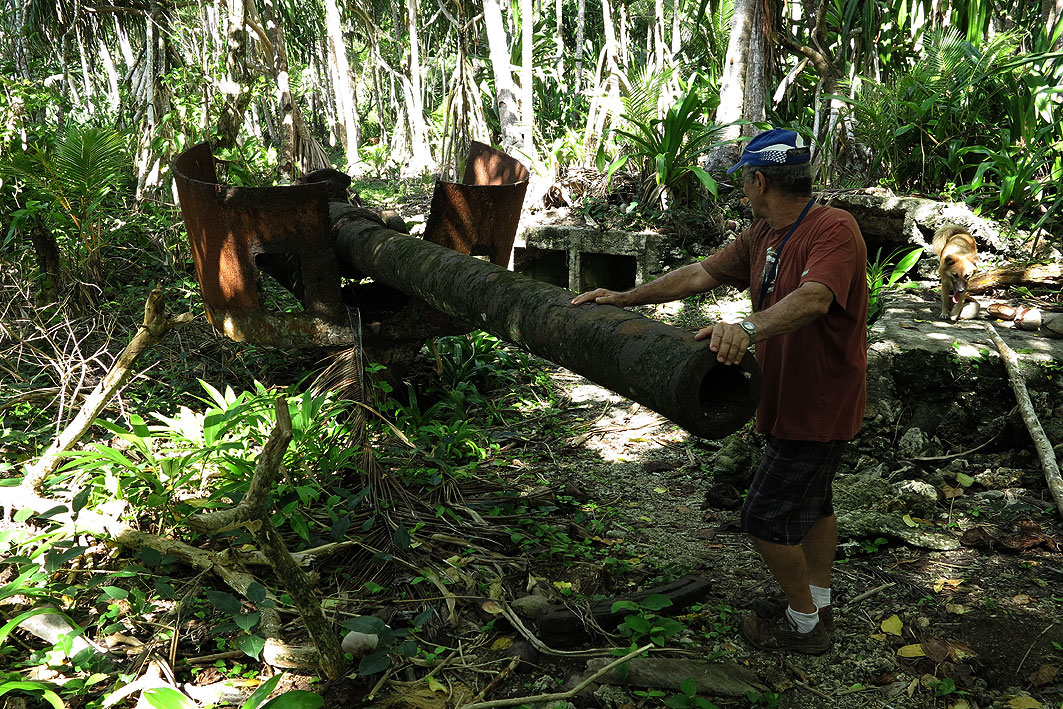 The locals on Big Nusa told us that one of their dogs is likely to follow us around. However, only a few minutes into our walk we heard fighting noises and terrible squealing. The dog just attacked a little piglet on the beach. I felt sorry for the pig but hesitated to come to its rescue. I just didn’t know the dog, what if it turns on me if I start trying to take away its prey? Had it been a person who is being attacked, of course I would have grabbed the nearest stick and tried to help. I don’t think I could live with the thought of watching somebody being mauled by a dog and just stand there, doing nothing. My conscience is, however, a bit more relaxed when it comes to pigs. After all, I have been on a number of pig hunts in New Zealand myself. I have actually gone up in the morning with the pure intention of killing a pig that day. And I eat them! On a regular basis. So being overly fuzzy and concerned now would seem to introduce some crazy, contradictory double standard which would mess with my brain. And I already have enough crazy, contradictory things my brain has to deal with. People in general provide a steady flow of them every single day. To make things worse, I like pigs. I think they are wonderful, intelligent animals. But they are also food. In this case for a dog. 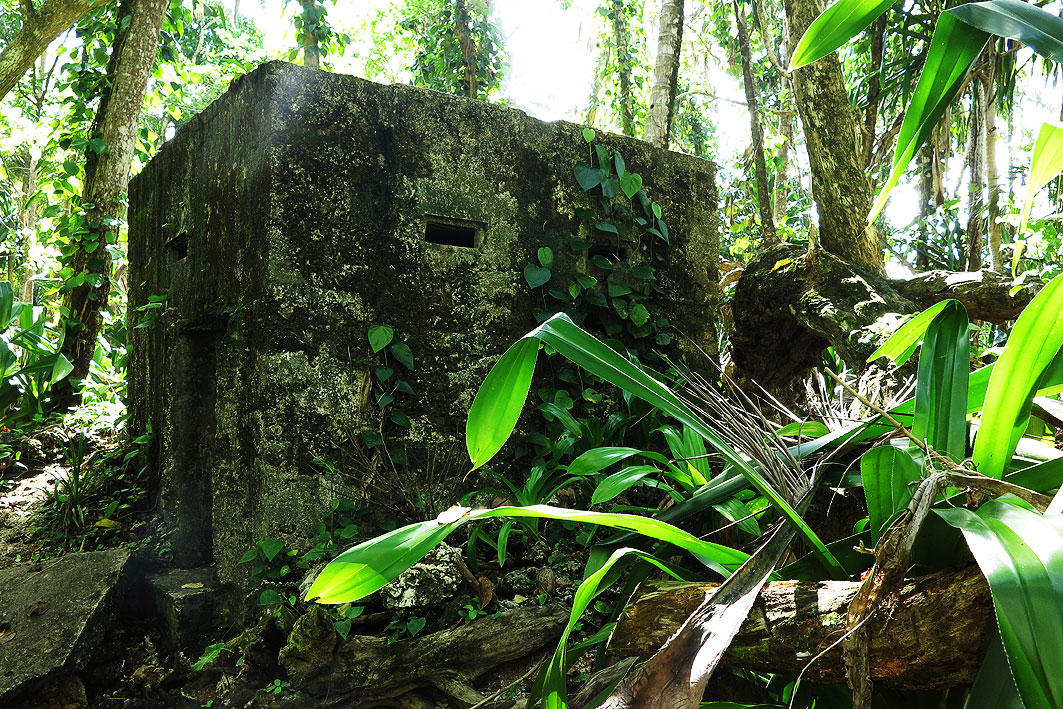 Peter, however, wasted no second to jump into the water and strangle the dog in true heroic fashion, in a desperate attempt to safe the piglet, without any regard for his own safety. I watched the screaming, swearing and growling bundle of human, dog and pig splash around in the water for a while. I tried to count Peter’s limbs. After a few minutes I was pretty certain he still had the full amount attached, they were also all moving at correct angles, there was no blood, so I decided it was safe enough to help him.

It was actually quite scary to see how powerful a dog is. All of our attempts to open its jaw were pretty useless. It was determined to kill the pig. After a while Peter was able to pull up it’s nose and it did let go of the pig. I tried to chase it away but it only ran a few meters before it collapsed. I picked it up and brought it to a woman who came running from the village, wondering what’s going on. The pig was still alive but I’m not sure it would live, I could feel many broken bones under the skin. I do think the locals were thankful we tried, at least. The dog continued to follow us as if nothing happened. What a Nutter.

The rest of the walk was uneventful, we came across several bunkers and guns and beautiful beaches. I did notice that hiking in this climate is quite tough. Even though it was only a two-hour walk, I was really tired afterwards. We went over to Nusa Island to relax. I went out snorkelling for a while and saw a moray eel hiding in a rock.

The last two weeks I was house sitting for the college’s director. I never know what to make of house sitting. I don’t have my stuff there and it doesn’t feel like home. I always feel a bit lost in the evenings. I fed the two dogs and walked around the property with them. The location of the house is quite nice. It is next to the college and the ground around it is really big. One side of the house has an open veranda with mosquito netting all around. That is where I slept. It was really great. Like being out in the open but less mosquitos. The house is so close to the ocean I could hear the surf all night. It’s also out-of-town and the ocean noises were mixed with the sounds of the jungle at night. It was very cool. I woke up with the sky going red behind coconut palm trees. I admit sleeping there was great. In the evenings I busied myself with reading. I read a lot. 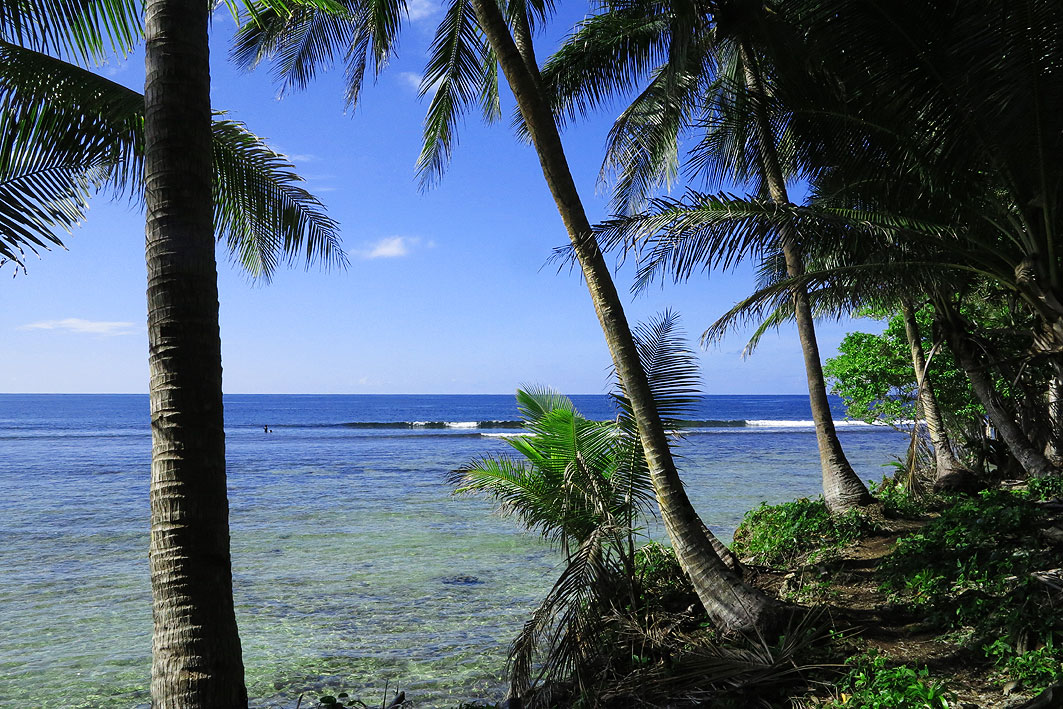 And just now Norah is coming in the door to my massive office to get a copy of the photos from the Big Nusa Trip. “Hi Norah”…… Sorry, I can’t write anymore, i have a visitor. It’s a big deal for me, I don’t get many. 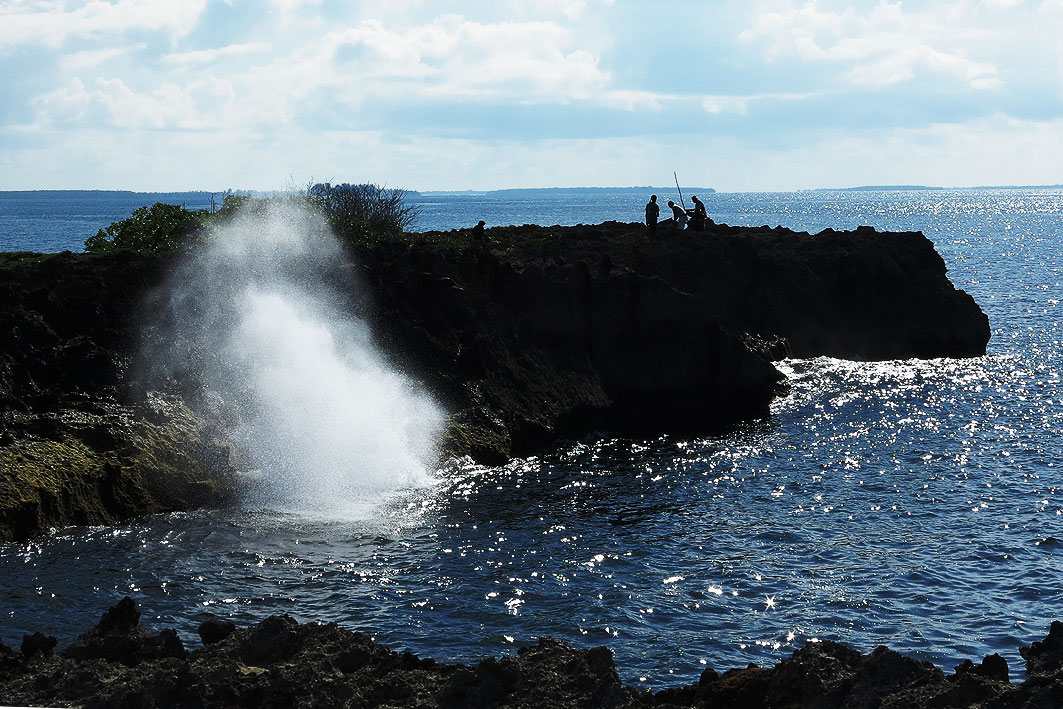 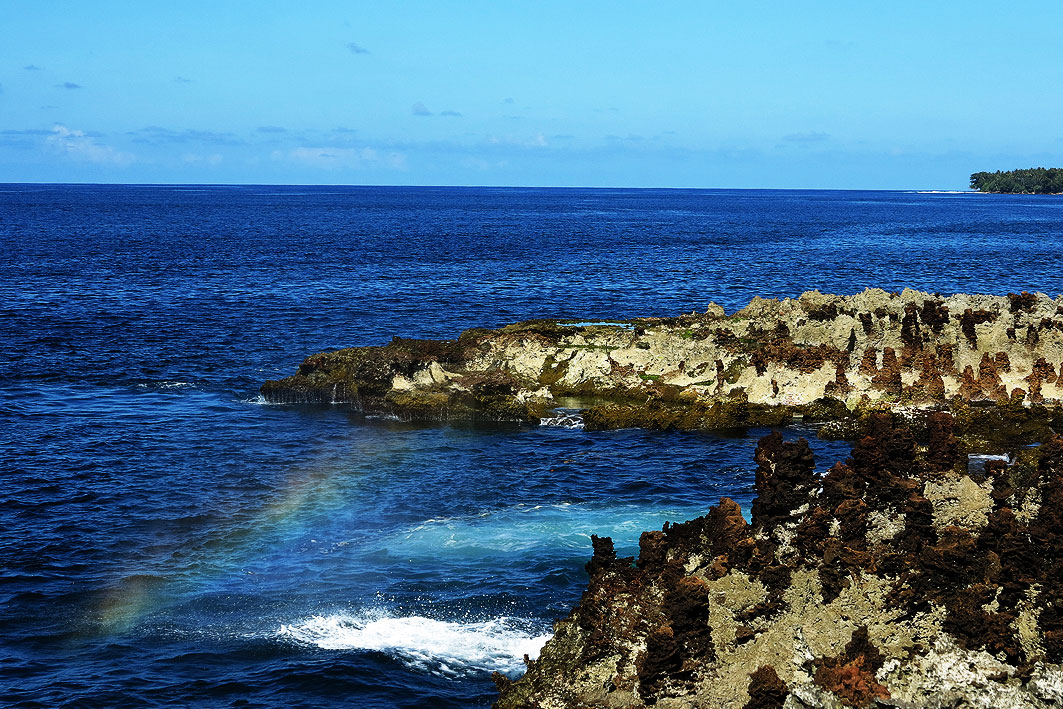 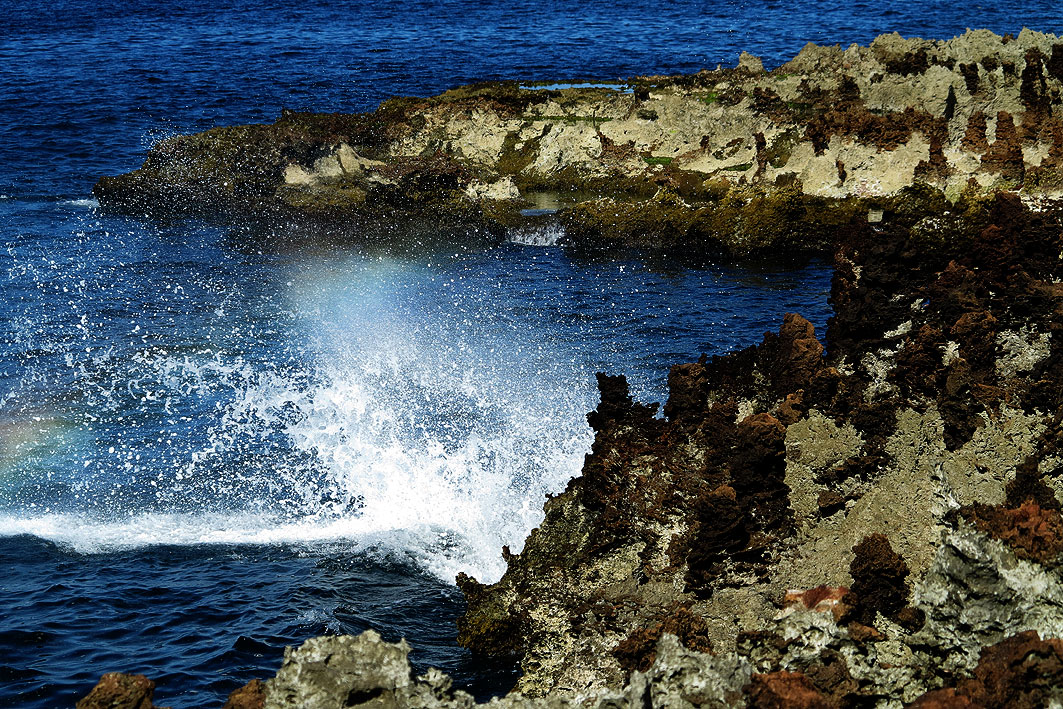 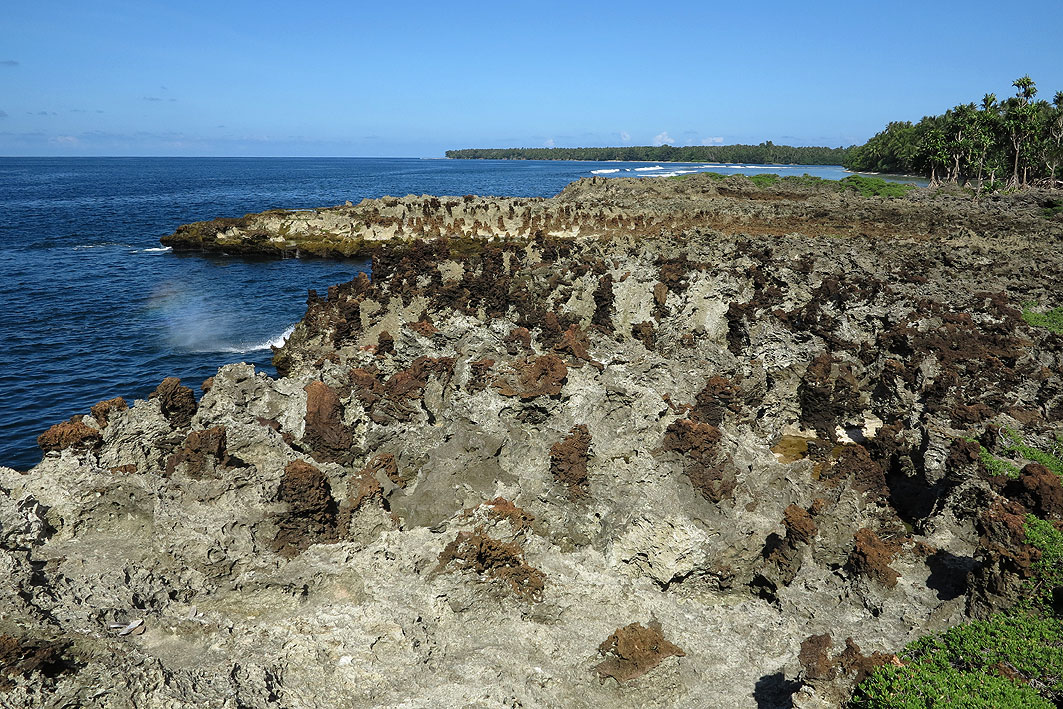 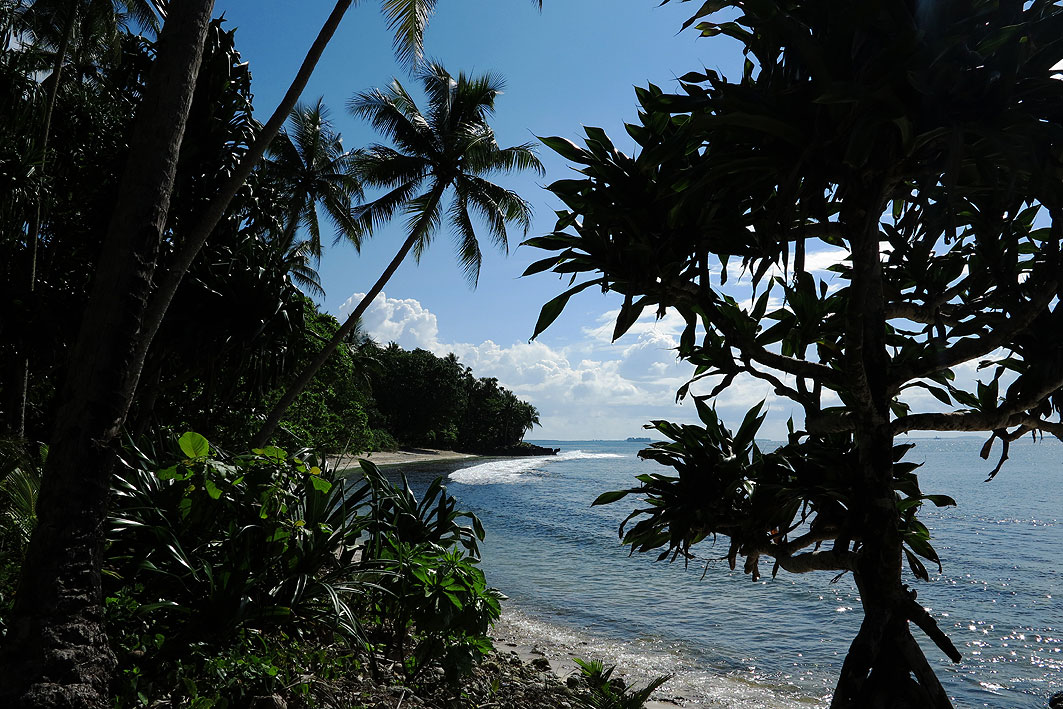 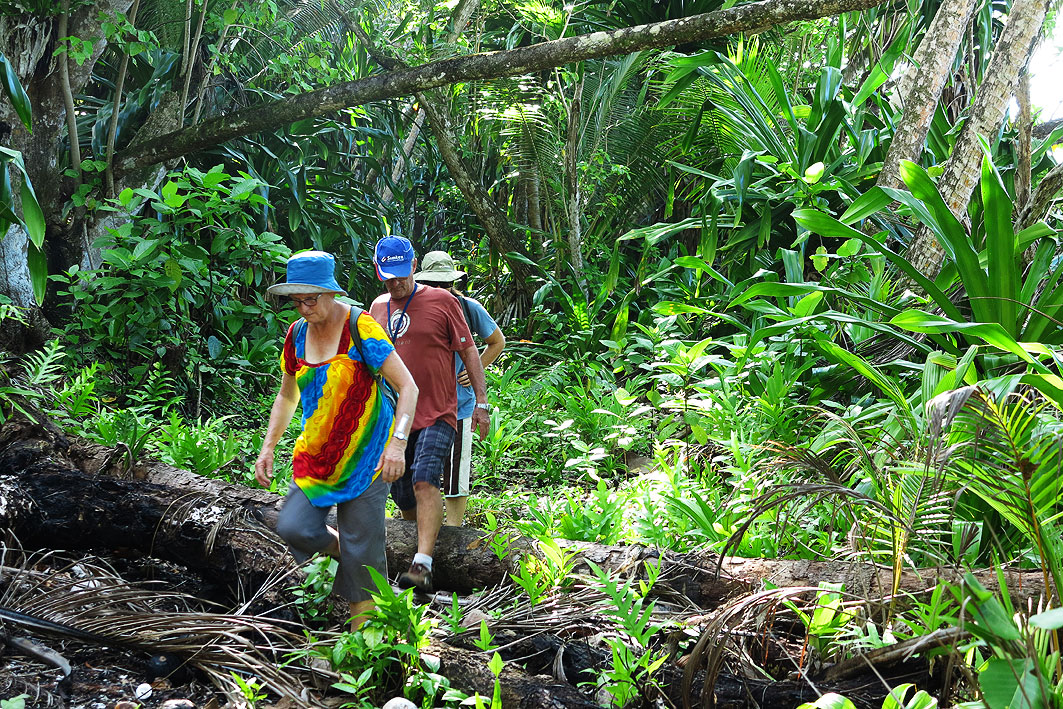