After a long discussion with myself and several meetings I have come to the conclusion that my second week at work was not the most exciting time period in my life. My camera gear list is pretty much complete and I was waiting for the quote from the australian shipping company to come through. However, the internet did not work the whole week. So I spent my time staring at the wall, my laptop screen, checking if the internet works every 1 to 2 minutes. It was a bit tough, I think I still run on western result driven mode. I felt useless and thought I was wasting time and resources. Sitting by myself in the office just enhanced the feeling.

On Thursday I had enough and grabbed my stuff to visit Norah, my co-volunteer working with disabled people in Kavieng, just for a chat. It was very obvious, she is needed a lot more than I am at the moment, hopefully this will change soon.

The weekend was another chance for exploration. Anne, Clara and Dylan went scuba diving on Lissenung Island and I joined them for a snorkelling trip. It was my first trip outside of Kavieng and it literally blew my mind. New Ireland is exceptionally beautiful. Everything is still so undeveloped it felt like I was the first person to see those islands. But there are villages everywhere, just not visible. No phone lines, blinking buoys, ships, roads, nothing. Just water and the green of the jungle.

There is a book called “Journey around the world” which I have read twice. It describes the pacific ocean how it was 250 years ago. It was written by the german naturalist Georg Forster who went with Captain Cook on his second voyage. I have always had a strong fascination with Captain Cook’s travels and this time period of exploration. Georg Forster’s book is regarded as the first modern piece of travel literature and reading it is

probably the closest one can get to time travel. His descriptions are so lively it almost feels like standing next to Captain Cook on the beach making first contact with a tribe. The islands here look exactly like Captain Cook would have encountered all islands in the pacific. I fully expected to see the “Resolution” anchor in one of the bays, it would not have surprised me. In my mind’s eye I certainly could see it sailing past me.

Lissenung Island Resort is operated by an austrian who came here in 1996. “My family thought I’m crazy” Dietmar told us. Besides his Resort and Diving operation he dedicates a lot of time in the rescue of the local sea turtles. Turtle eggs have always been part of the diet of the local people but the growing population is too demanding on the turtles and Dietmar saves the eggs and lets them hatch on his island trying to bring the

decreasing amount of turtles back up and out of the “endangered species” zone. He does it on his own initiative and costs. He is trying to start a Trust Foundation and apply for funding. Hopefully I will be able to get to the island and witness hatching of the turtles live. Several nests are due soon and hopefully they let us know in time so we can have a chance to hop on a boat and cruise over there.

I went snorkelling with Clara, who is in Kavieng for 10 days only to do some health surveys. We were both blown away by the reef. I think this is pretty much as good as it can get when it comes to coral reefs. It looks healthy and the colors of the coral and fish are just mind-blowing. We also saw a sea snake, which is cool but less thrilling because they are very poisonous. The good thing is they only have tiny teeth and are not aggressive. We also saw a large swarm of the strange-looking trumpet fish and a few small reef sharks. We were in the water for two hours and totally exhausted afterwards.

In the afternoon we drove down the Boluminski Highway to visit the Palm Oil Plantation Factory. The volunteers were invited for a party at a private home. I did not know Florence but she was very welcoming to everyone and made us newcomers feel like we have always belonged to the rest. It was about an hour to drive and it was very scenic. I received a first glimpse of the mountains in the interior of New Ireland which are completely covered by rainforest. I spoke to Ian, who was with me in the car and who recently has crossed the Simpson Desert in Australia on foot, that we should do some tramping there soon. I am very keen on this and wish I had brought more hiking equipment, especially my good boots. Well, too late now, whatever I have will just have to do. But I cannot miss that chance to dive into this amazing looking landscape. We drove back to Kavieng in the evening and I was amazed about the quality of the road. It almost felt like driving somewhere in New Zealand. All houses along the road had electrical lights. It is very deceiving as this is literally just a thin line of modern technology crossing the island. Just off the road the land becomes very wild. The Highway was orignally named Kaiser-Wilhelm-Chaussee during the German protectorate, according to Wikipedia, which is always a reliable source of information. It was named Boluminski Highway in 1975, after Papua New Guinea’s independence. It is named after Franz Boluminski who was the german district officer from 1910 until World War I. Back then New Ireland was known as“Neu-Mecklenburg”. It is embarrassing but I had absolutely no idea about the german history in this area before I came here. In fact, I even had absolutely no idea about the area as such until 5 months ago.

Monday eventually arrived and I wanted to fill my day with more useful things than just sitting there waiting for the approval of my quote. So I joined Rob and Janna, two more co-volunteers down to the waterfront were Rob

works and were all the fishing equipment is stored and the ships are anchored. I joined Janna to a trip to Nago Island, which houses the College’s research facility. It’s a 10 minute boat ride. Just when we got

on board a storm came through with strong wind gusts. Of course, me the newcomer, did not know where to sit in the boat and I got completely soaked from the splashes. Very amusing for all on board.

Wayne, the american marine biologist on Nago Island showed me around. They are attempting to breed the large variety of local clownfish in captivity for export overseas. As far as I understand mainly for research institutions. New Ireland has a large

number of Clownfish species, including the one everybody calls “Nemo” but nobody seems to know the real name. Some species are almost black in color, this is very rare and makes the fish quite valuable. I hope I will find out

more in time, when I finally have a camera to do some work and get some filming done.

Right now, I still don’t have anything, so I spent the time walking around the island until we got picked up at lunch time and I was brought back to my office/prison/cel. 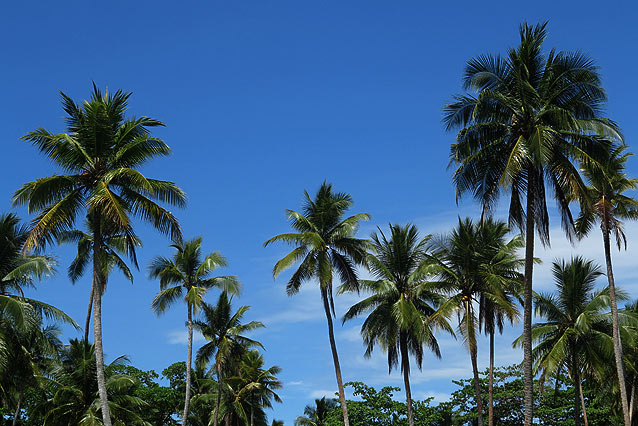 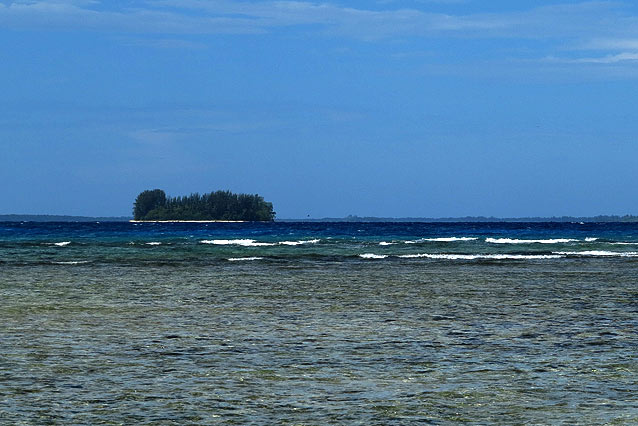 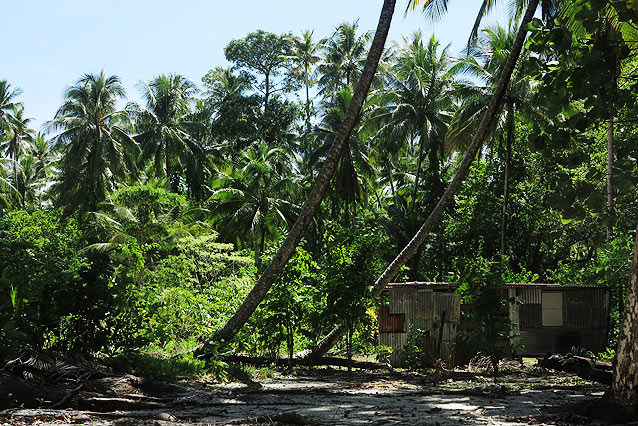 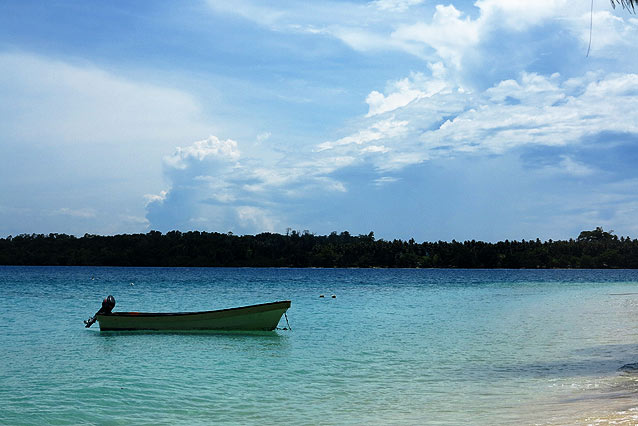 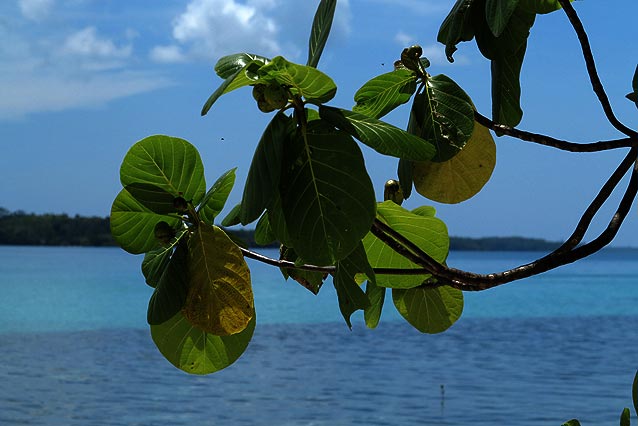 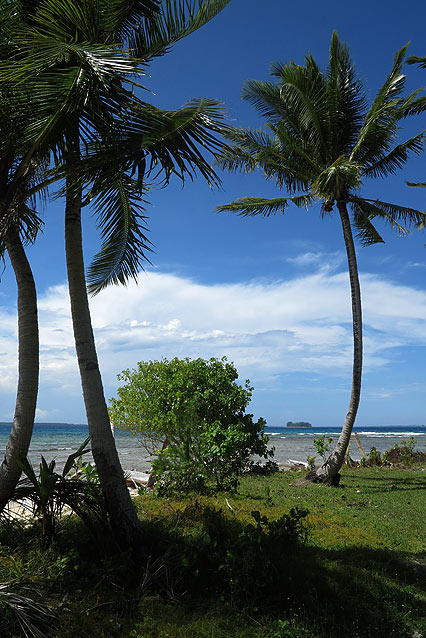 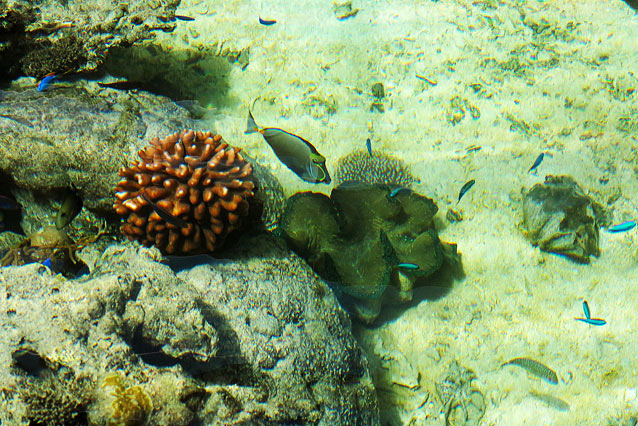